Who's Taking Care of Our Children? 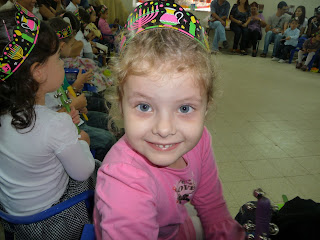 Last Thursday I went with Maya' kindergarten to a puppet theatre. Maya was still at home coughing, but because she was on the mend, I decided she could go to the show. She loves them puppet shows very much.

I usually go with the kiddies to help a bit (and believe me or not, I am the only parent who ever comes) because to take 34 squirmy, slightly hyper active 4 year olds outside the kindy (and with a bus) it is not easy.

This time we arrived a bit early at the kindy so Maya had the chance to participate in the music lesson and I had the opportunity to observe the lesson and the sorroundings...There are 34 kids at Maya's kindy, from 3 to 4 tears old, ONE TEACHER and ONE HELPER. They sit in a room that is almost the same dimensions as my living room...They hardly have room to turn around and barely enough chairs to sit on. I don't think the bulding was meant for such a large group of kids. Oh, and they have only two toilets...

I was watching the children, many of them with snotty noses (and faces), sneezing, coughing, dirty and with unlaced shoes...

The kindy was smelling of urine and bleach and my heart lurched in my chest. The picture was bleak, depressing. The room was cold as there are no carpets on the stony floor and dark, as there are only two windows.

And this is a city hall operated kindy. Maybe the private ones are fancier, but the prices...not that the state owned ones are much cheaper...

Israel is a country with a high birth rate (an average family has usually three kids), a lot of problems and the money is tight. I am not here to discuss budget politics and such because I would enter a very shifty place but I am appaled at the conditions in the state owned kindergartens and schools ( I taught in them for 5 years, so I know). Not to talk about the teachers' wages, that a totally different (and painful) story.

I know Israel is not America (not even Europe) but, education, come on, nodoby is giving it a lot of thought. That's why in the end I have to pay for the kindy a lot of money every month and my daughter stays at home, sick with one virus or another...Last year was cathastrophic as she was younger and never out of our home, thank God this year she knows to take care of herself (more or less) - wash her hands, wipe her nose and stuff like that.

And believe it or not, she likes to go at the kindy, loves the kids and her teacher.

Speaking of which...her teacher, Dorit is absolutely fantastic. And the same goes for her helper, Sigal. They are able to to so much with so little resources. They are kind and caring and I am in awe how on Earth are they able to cope...Maya loves them both and that says a lot to me. Last year the teacher told us Maya had "problems" and then she left after a few months, not being able to cope (so, who had the "problems" in the end?).

So, what can I say... While the system is faulty and the ones who should don't give a damn, thank God for the simple people who care...As long as there are teachers like Dorit and Sigal I must say there is still hope for humanity.

(Even though the picture is not very...professional, I've uploaded it for you to see the one and only room in Maya's kindy. The picture is taken during their Hanukka party, last December).

We just had to decide about gan enrollment for Ezra and Shiri. There are three gans within our preferred framework, and two of them group 3 and 4-year-olds together, making our not-yet-3-year-olds not only the smalles (they are way smaller than their age), plus I really don't like the teacher at one and the assistant in another one. And then there is the thing about... money. So we decided to keep them home an extra year. I'm still not 100% sure if that was the right decision, but... yeah.

I personally think you made the right decision to keep them at home another year, especially if the kids are smaller and all that. Let them grow a bit, get stronger...