And Now, About the Books - a very long post, 'cause I read an awful lot lately 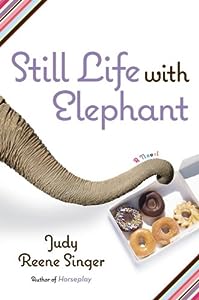 Cover of Still Life with Elephant: A Novel
As I've told you in my previous post, I've read a lot, and I mean A LOT of books lately. Most of the were absolutely brilliant and I am going to mention them here, maybe you'll want to give them a try.
First, the ones in the paranormal genre (my favourite, as you know by now) were: Cassandra Clare's "Mortal Instruments Trilogy" (City of Bones, Ashes and Glass). Didn't take my breath away but made a nice lecture. I think there is one more book in the series, but I am not sure I want to read it. Lauren Kate's "Fallen" and Becca Fitzpatrick's "Hush, Hush" are, by far, my favourites. Very nice YA fiction. I know that "Torment" - Lauren Kate's second book is out, and I cannot wait to read it!
If you want to know more about the books I recomend you the goodreads site, you can find some good reviews there.
I also read Charlaine Harris's "Harper Connely" series - "Grave Sight", "Grave Surprise" and "An Ice Cold Grave". I liked them a lot. I almost liked Harper better than I did Sookie Stakehouse.
Looking forward to the fourth book.
Speaking of nice books...I also read Alan Bradley The Weed that Strings the Hangman's Bag - a Flavia de Luce mystery. Actually, the first Flavia de Luce book is "The Sweetness at the Bottom of the Pie".
This is what goodreads says about the two books:
"In his wickedly brilliant first novel, Debut Dagger Award winner Alan Bradley introduces one of the most singular and engaging heroines in recent fiction: eleven-year-old Flavia de Luce, an aspiring chemist with a passion for poison. It is the summer of 1950—and a series of inexplicable events has struck Buckshaw, the decaying English mansion that Flavia’s family calls home. A dead bird is found on the doorstep, a postage stamp bizarrely pinned to its beak. Hours later, Flavia finds a man lying in the cucumber patch and watches him as he takes his dying breath. For Flavia, who is both appalled and delighted, life begins in earnest when murder comes to Buckshaw. “I wish I could say I was afraid, but I wasn’t. Quite the contrary. This was by far the most interesting thing that had ever happened to me in my entire life.”

To Flavia the investigation is the stuff of science: full of possibilities, contradictions, and connections. Soon her father, a man raising his three daughters alone, is seized, accused of murder. And in a police cell, during a violent thunderstorm, Colonel de Luce tells his daughter an astounding story—of a schoolboy friendship turned ugly, of a priceless object that vanished in a bizarre and brazen act of thievery, of a Latin teacher who flung himself to his death from the school’s tower thirty years before. Now Flavia is armed with more than enough knowledge to tie two distant deaths together, to examine new suspects, and begin a search that will lead her all the way to the King of England himself. Of this much the girl is sure: her father is innocent of murder—but protecting her and her sisters from something even worse….

An enthralling mystery, a piercing depiction of class and society, The Sweetness at the Bottom of the Pie is a masterfully told tale of deceptions—and a rich literary delight.

From Dagger Award–winning and internationally bestselling author Alan Bradley comes this utterly beguiling mystery starring one of fiction’s most remarkable sleuths: Flavia de Luce, a dangerously brilliant eleven-year-old with a passion for chemistry and a genius for solving murders. This time, Flavia finds herself untangling two deaths—separated by time but linked by the unlikeliest of threads.

Flavia thinks that her days of crime-solving in the bucolic English hamlet of Bishop’s Lacy are over—and then Rupert Porson has an unfortunate rendezvous with electricity. The beloved puppeteer has had his own strings sizzled, but who’d do such a thing and why? For Flavia, the questions are intriguing enough to make her put aside her chemistry experiments and schemes of vengeance against her insufferable big sisters. Astride Gladys, her trusty bicycle, Flavia sets out from the de Luces’ crumbling family mansion in search of Bishop’s Lacey’s deadliest secrets.

Does the madwoman who lives in Gibbet Wood know more than she’s letting on? What of the vicar’s odd ministrations to the catatonic woman in the dovecote? Then there’s a German pilot obsessed with the Brontë sisters, a reproachful spinster aunt, and even a box of poisoned chocolates. Most troubling of all is Porson’s assistant, the charming but erratic Nialla. All clues point toward a suspicious death years earlier and a case the local constables can’t solve—without Flavia’s help. But in getting so close to who’s secretly pulling the strings of this dance of death, has our precocious heroine finally gotten in way over her head ?"
Moving on, folks, to chick lit. A bunch of goodies here, also: Carmen Reid - "Celebrity Shopper". If you like Mrs. Read, you'll enjoy this one, too. Jane Costello - "My Single Friend", good read. A bit expectable but still, worthy the effort. Jill Mansell - "Take a Chance on Me". I love Jill and I wasn't dissapointed by this book..."Friends, Lovers and Indiscretions" by Fiona Neill was a nice read, also. But, the books I loved most were:
Milly Johnson "A Summer Fling" was an absolutely delight. Here is what goodreads says:
"When dynamic, power-dressing Christie blows in like a warm wind to take over their department, five very different women find themselves thrown together at work. But none of them could have predicted the fierce bond of friendship that her leadership would inspire...Anna, 39, is reeling from the loss of her fiance, who ran off with a much younger woman. Her pride in tatters, these days Anna finds it difficult to leave the house. So when a handsome, mysterious stranger takes an interest in her, she's not sure whether she can learn to trust again? Then there's Grace, in her fifties, trapped in a loveless marriage with a man she married because, unable to have children of her own, she fell in love with his motherless brood. Grace worries that Dawn is about to make the same mistake: orphaned as a child, engaged to love-rat Calum, is Dawn more interested in the security that comes with his tight-knit, boisterous family? When a sexy, footloose rock singer catches her eye, will Dawn have the courage to follow her heart? At 28, Raychel is the youngest member of their little gang. And with a loving husband, Ben, and a cosy little nest for two, she would seem to be the happiest. But what dark secrets are lurking behind this perfect facade, that make sweet, pretty Raychel so guarded and unwilling to open up? Under Christie's warm hand, the girls soon realise they have some difficult choices to make. Indeed, none of them quite realised how much they needed the sense of fun, laughter, and loyalty that abounds when five women become friends. It's one for all, and all for one!"
I must look for her other books, I am sure they are great too.
Another good one was Amy Huberman "Hello Heartbreak."
But, the best of the best was "Still Life with Elephant" by Judy Reene Singer. It took my breath away...I cried while reading it, and all I can say is please, please go and buy the book and read it! You won't be dissapointed, I guarantee it! Cross my heart...And if you don't believe me, read the goodreads review...
"Can a badly abused elephant halfway across the world help a woman win back her cheating husband? In this funny, heartwarming story, the author of the beloved novel Horseplay presents another smart, memorable heroine and the animals—and men—she loves.

Neelie Sterling never did listen well to the conversation around her. Always preoccupied with an inner monologue, she sometimes missed things. She was happy when Matt, her veterinarian husband, told her he was getting a collie; she liked dogs. He had said colleague, to help with his busy practice. The problems start when the pretty blonde “collie” calls Neelie to say that she is pregnant with Matt’s child. Sent into a tailspin, Neelie throws herself into her horse training business until she discovers that Matt is part of a group planning to leave for Zimbabwe to rescue a badly injured elephant. Thinking she could win Matt’s heart again, Neelie manages to get included.

The trip is dangerous, exhilarating, and revealing. Neelie learns about herself as a wife and a woman. Back at home, she discovers secrets everywhere—with her parents, with Matt, even in training an elephant. Fighting to keep her life from unraveling as she struggles to gain the elephant’s trust, she ultimately learns that healing can be mutual ".
Well, I hope I convinced you. Gotta go now! Loads of good books to read...