I Forgot About the 1st of March 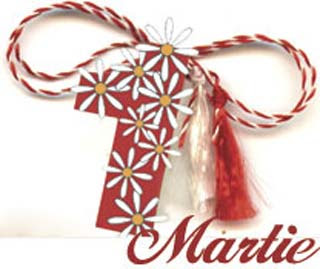 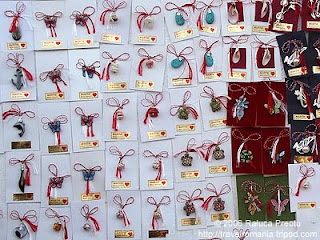 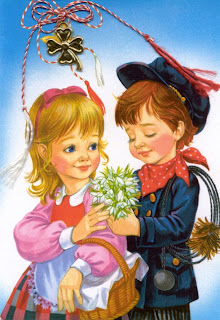 Shame on me! I forgot all about the 1st of March...Back home in Romania, there is a very special holiday on this day, the "Martzishor". Wikipedia has a very comprehensive article about it here:
http://en.wikipedia.org/wiki/M%C4%83r%C5%A3i%C5%9For
If you don't have the patience to read it all, here is an excerpt:
"The name Mărţişor is the diminutive of the name for March (Martie, in Romanian), and thus literally means "little" or "dear March". It is also the folk name for this month.
Mărţişor, marţ and mărţiguş are all names for the red and white (or black and white, also blue and white) string, from which usually a small decoration is tied, and which is offered by people on the 1st day of March[3]. Giving this Talisman to other people is an old custom, and it is believed that the one who wears the red and white string will be powerful and healthy for the year to come. It is also a symbol of the coming spring. Usually, women wear it pinned to their blouses for the first 12 days of this month, until other certain spring celebrations, or until the bloom of certain fruit-trees. In some regions, a gold or silver coin is hanged from the string, which they wear it around the neck. After wearing it for a certain period of time, they buy red wine and sweet cheese with the coin, according to the belief that their faces would remain beautiful and white as cheese, and rubicund as the red wine, for the entire year[4].
In modern times, the Mărţişor lost most of its talisman properties and became more of a symbol of friendship and love, appreciation and respect. The black threads were replaced with red, but the delicate wool ropes are still a ‘cottage industry’ among the country people. They still comb out the wool, dye the floss, and twist it into thousands of tassels. In certain areas the amulets are still made with black and white ropes, for warding off evil!"
When we were kids we used to show off the martzishors we recevied from boys, it was like a competition for the most popular girl or something...We used to give them to our teachers and all our female relatives and friends. I remember I used to have a very impressive collection...
I am a bit sad, really as nobody remembered to send me one. I have friends and relatives back in Romania, but apart from two "virtual" martzishors...nobody ever bothers. Well, maybe they think it is not important. Or maybe they don't think at all. Never mind, though. I found some nice coloring pages and I am going to tell Maya all about the tradition.
(As you can see, I've put some pictures that are relevant for this tradition. I've taken them from here:
http://andreea02.wordpress.com/2008/03/02/femeile-si-martisorul/
http://andreir.wordpress.com/2009/03/01/la-multi-ani-de-1-martie-2009
http://travelromania.tripod.com/i_romaniapictures3b_1.htm
Thank you guys!)
Happy 1st of March to everybody who celebrates it!
at 10:18 AM