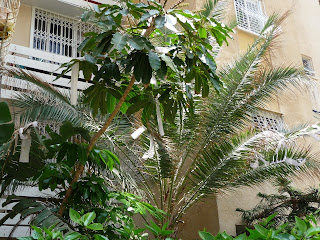 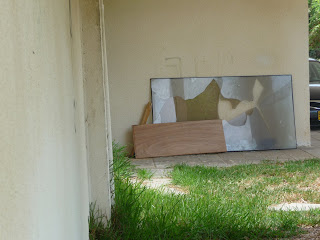 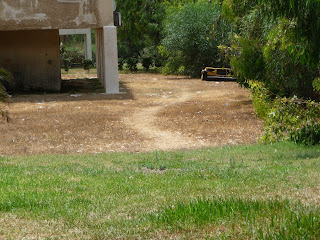 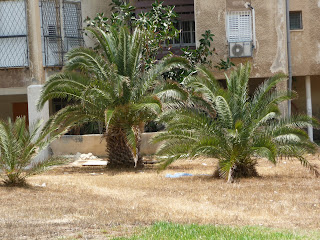 Yesterday I wrote about the fact that here, it is everybody's bussines what one does. Today, I'll go further and say that, in fact, NOBODY CARES ABOUT ANYTHING, only about their selfishness. And I'll illustrate it with pictures that I've taken today, from our neighbourhood and from around our building.
In the first picture you can actually see that somebody "decorated" the palm trees near the entrance in our building with toilet paper. I think it will melt with the first rain...sometime in November... Then, in the second picture you can see that somebody changed a window in their apartment and left the old one at the back. Of course, others broke it...and it has been there for months now. The next two pictures are of the building near the one we live. You can see than nobody tends to the grass, that they simply throw their garbage through the window, every inch of the once-had-been grass is littered with filth. Oh, and the lodgers decided that they want the facade of the building repaired...What goes around it...who cares?
It hurts when I see so much carelesness around me.
We also have somebody in the building that throws her garbage through the window. It is just that in our building live a few people that care...
It is sad so see so much filth everywhere. I saw many times youngsters that don't know the fact that garbage cans were invented a long time ago, and for what purpose...what am I saying? Next time I'll post a picture of the sand pit and the park where we go with Maya. And you'll see with your own eyes.
And, a short poem. Inspired by the reality that surrounds me.
here.summer
outside
it smells like burnt grass
somebody decorated the trees
with toilet paper.
my pocket holds a marble
one shekel warmed in the sun
one peach stone
they are cutting the trees's branches
again
shut the window
the noise goes straightly into my heart
breaking it.